Sandra was baptized on February 5th, 1942 at Immanuel Lutheran Church in Parkers Prairie Minnesota by Reverend A. H. Sieving with sponsors Edmund Riedel and Eleanora Vitek and was confirmed on June 10th, 1954 by Reverend Mueller.

Sandra was raised by her loving grandparents Mary and Adolf Lenz.

Sandi would tell how when she was little, that she would mow lawn to earn a dime so she could go to the show with Janny and Tommy Uhde.

Sandi Graduated from Parkers Prairie High School and then went to beauty school and worked as a beautician and loved to cut hair.

One night in 1961 Sandi met her future husband Jim at a dance at the Clarissa Ballroom and ending the night at Chet’s Lakeside Inn. They were married the next year on June 24th, 1962 at Immanuel Lutheran Church by Reverend Mueller.

Sandi and Jim moved to the twin cities shortly after they were married and lived in an apartment on Freemont Avenue. While there, they had their children Troy and Darcy. A year or 2 later, they bought a house in Osseo Minnesota. They met many new friends while living there including close friends Georgia and Bernie Taylor whose family they kept in touch with throughout the years.

In 1969, they moved closer to home and bought a place on Highway 29 near Miltona Minnesota and a year later, bought the Leaf Valley Store. They owned the store for about 6 years and then bought Jim’s Uncle Walter and Aunt Adeline’s farm where they worked and lived for the rest of their lives. Sandi And Jim had a lot of help around the farm. She was very close with Jeff and Linda Froemming and their son’s Ken and Aaron who helped around the farm as well.

Sandi liked snowmobiling with Jim and their friends in their younger years. Sandi liked playing cards, doing puzzles, making wine and having wine parties with relative and friends. Sandi enjoyed going fishing with the kids and grandkids off the road at Crooked Lake. She really enjoyed going to Troy and Darcy’s ball games and made them whenever possible. She was like a second Mom to many of the boys on the teams. She was a big fan of the Klimek Brother’s Well Drilling softball team and could be found cheering them on most Tuesday nights. Sandi enjoyed having Megan and Ashley around growing up helping on the farm, baking cookies, making ice cream and going to various activities such as the track and field meets, school plays and Christmas programs. Sandi enjoyed when Tara, Jason, Robert and Clarice would come to visit from out of town. Sandi had fun going to the casino and also their trip to Vegas with the girls and her sidekick Lori. Sandi enjoyed making her famous chicken and dumpling soup, homemade pizza and bread for everyone to enjoy. Sandi always took pride in keeping her house in order, the grass mowed and her flowers around the house looking nice.

Sandi was an active member of Ebenezer Lutheran Church and her and Jim took pride in laying out the plots in the cemetery.

Sandra passed away peacefully on February 18th, 2022 at Alex Assisted Living in Alexandria Minnesota surrounded by family at the age of 80.

A celebration of life will be held later this year. 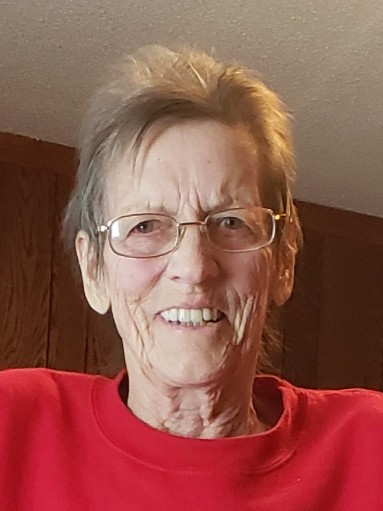