Harriet Johnson slipped into heaven on Sunday, January 23, 2022 greeted by her husband, Conrad, her son, Bruce, her grandson Jason, and her great-grandson Blake as well as her parents, Elmer and Lillian Jackson and siblings Doris, Eldred, DeWayne and Corrine, her dear in-laws John K and Lena and many brother and sister in laws, cousins, and friends.

Harriet grew up on a farm near Starbuck and loved helping with chores outside so much more than chores in the house which she happily left to Doris. All the girls learned how to garden and can produce and were master bakers of bread, cakes, cookies, and bars.

Harriet attended country school until the 8th grade and graduated from Starbuck High School in 1949.

She met Conrad in November 1948 at a dance at Glenwood’s Lakeside Pavilion. One of her best memories was getting stuck in the mud on the way home from a dance and being so concerned about her black velvet shoes.

Conrad and Harriet married on October 15, 1949, at Immanuel Lutheran Church as Conrad thought she lived too far away to drive there every weekend in his old ’38 Chevy. They moved to the family farm near Kensington where they lived for two years with John K and Lena before moving into the four-room house where they remained for forty-eight years. From 1952 through 1961, they welcomed Bruce, Mark, Barbara, Lori, SuAnn, Judy and Carla into their family. Harriet created a home that helped each of their kids dare to dream and see possibilities instead of limitations.

Harriet was a wonderful seamstress and sewed countless Christmas and Easter dresses for her five girls. Sewing brought Judy particularly close to her mother and Harriet helped her fulfill her dream of starting her own company, JL Johnson Bridals. Harriet was one of Judy’s first employees and worked in Hoffman, from home, and periodically in North Dakota sewing miles of curly-edged veils.

Solem Lutheran Church of rural Kensington became very important to Harriet, and she served as the Sunday School treasurer and was active in Ladies Aid and bible study for many years. Later, reading to residents at the nursing home in Hoffman became a real mission and she faithfully went every week, even after she stopped driving when Mark began driving her in her big Lincoln Continental.

Harriet loved music from the time she was small when the various Loen relatives brought music into their home. Carla helped line up numerous trips to the Polkafest where Harriet was thrilled to meet Molly B and Florian Chmielewski and loved dancing to “The Blue Skirt Waltz.”

Harriet especially loved babies and rocked dozens of Lori’s more than 400 foster children in addition to her grandchildren and great grandchildren.

The summer highlight for many years was Harriet and Conrad’s wagon rides to Staffanson’s prairie. The Grant County Wagon Train became almost a rite of passage for grandchildren to participate in. Jason and Burt were the first of the grandchildren to ride along but were joined later by Annette, Chris and Matthew, Beau, Wade and Zach, Heather and Chris, and AJ. Cory tried to ride along but made a quick exit as a res ult of allergies.

Harriet and Conrad also took trips to New York City where Conrad was mistaken for Mayor Koch and to Niagara Falls and the Northeast on a fall bus tour. Harriet visited many places around the globe vicariously through her children and grandchildren and in her later years recounted visits to Australia, Antarctica, and The Great Wall of China with amazing detail. One of her last real trips was to Las Vegas to watch Annette compete in Miss America. Her family logged many miles pushing grandma up and down Las Vegas Boulevard in a rickety borrowed wheelchair.

Harriet and Conrad traveled countless times to North Dakota to watch grandchildren’s school and church programs, basketball games and swim meets. They spent their retirement winters in Florida with Barb’s family where she enjoyed pitching a baseball, playing street hockey and HORSE and even beating the boys on occasion. Harriet was particularly proud of Wade, Beau and Zach’s military service and was able to attend a military ball and her grandsons’ commissioning ceremonies. Harriet made wonderful monster cookies and mailed them to her soldiers wherever they were serving. She was delighted to know that the cookies were shared with other servicemen.

A daily highlight for Harriet was checking the mail because she looked forward to letters and packages. It felt like Christmas throughout the year as she did her part to support the postal service by ordering all sorts of items and supporting many charities.

Harriet lost Conrad in 2000 which changed life for her. She continued to drive out to North Dakota and travelled to Florida for another ten years. She was so happy living on the farm with Mark. In her last years, she lived in the Bethel Apartments and then at Knute Nelson Grand Arbor in Alexandria where she continued to befriend those around her and spread her deep faith.

Funeral Service: 1:00 PM Friday, January 28, 2022 at Messiah Lutheran Church, Hoffman, with visitation one hour prior to the service. 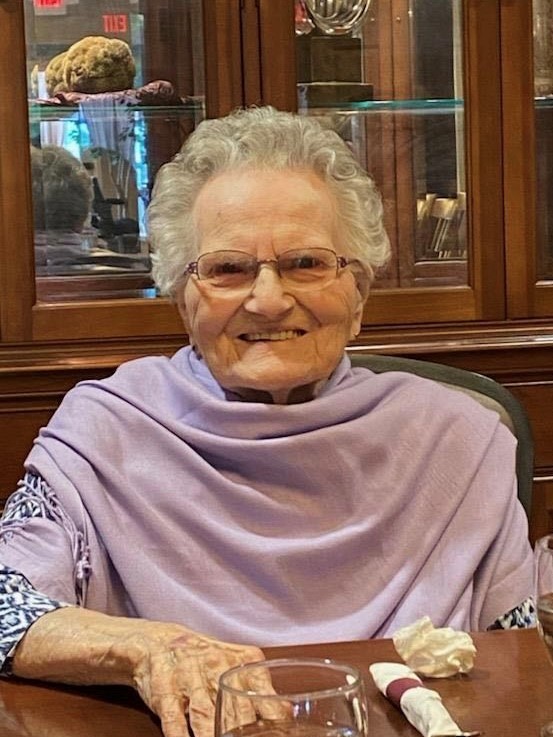